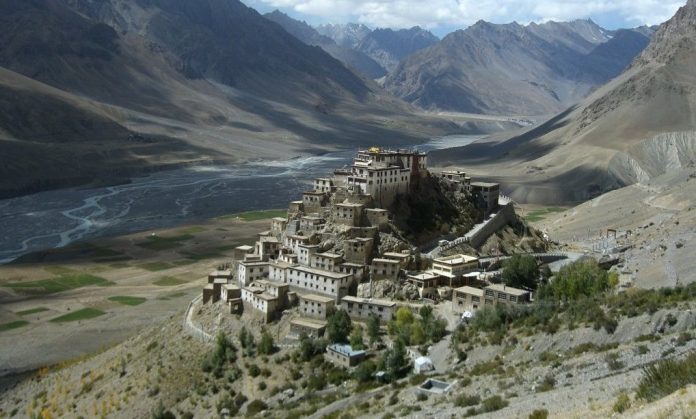 Key Monastery is Buddhist monastery located on top of a hill at an altitude of 4,166 metres above sea level, in Lahaul Spiti district of Himachal Pradesh in north India. Also known as Key Gompa, it is biggest centre of Buddhist learning in Spiti Valley and the oldest training centre for Lamas. It is home to around 300 lamas who receive their religious education here. The place is considered to be one of the most important research and debate centre for Buddhists.

The evolution of this monastery dates back to 1000 AD. Dromton, the pupil of the renowned teacher Atisha is known to have founded the Key Monastery. This may however, refer to a now destroyed Kadampa monastery at the nearby village of Rangrik, which was probably destroyed in the 14th century when the Sakya sect rose to power with Mongol assistance. Nevertheless, it is believed that the monastery is at least a thousand years old. There was even a celebration of its millennium in 2000 in the presence of the Dalai Lama.

Key Monastery was frequently attacked and destroyed by invaders. Key was attacked again by the Mongols during the 17th century, during the reign of the Fifth Dalai Lama and became a Gelugpa establishment. In 1820 it was sacked again during the wars between Ladakh and Kulu. In 1841 it was harshly damaged by the Dogra army under Ghulam Khan and Rahim Khan. This was followed by a devastating fire in the 1840s. In 1975 a violent earthquake caused further damage to the building which was repaired with the help of the Archaeological Survey of India and the State Public Works Department.

Repeated attacks on the monastery resulted in frequent renovation and reconstruction work which in turn has given rise to irregular box like structure. The building has the appearance of a defensive fort rather than a monastery.

The monastery is famous for its architecture called Pasada style. Pasada style is characterised by two or more stories and often plays the role of a fort-monastery. The monastery is spread over three floors – underground, ground and first floor. Underground is mainly utilized for storage; ground floor is used as assembly hall. The ground floor also has small rooms for monks.

The name ‘Spiti‘ means “The middle land” and here quite surprisingly so, it is the land between Tibet and India and maybe that’s the very reason for it shares a very similar and intense Buddhist culture as to that found in Tibet and also in Ladakh. It is hardly surprising that the whole of Spiti is known as Little Tibet.

Key is among the three monasteries of the Gelugpa sect in Spiti valley, the other being Tabo Monastery and Drangtse Monastery.

Some of the scenes of Bollywood movie Paap, starring John Abraham and Udita Goswami, were shot at Key Monastery.