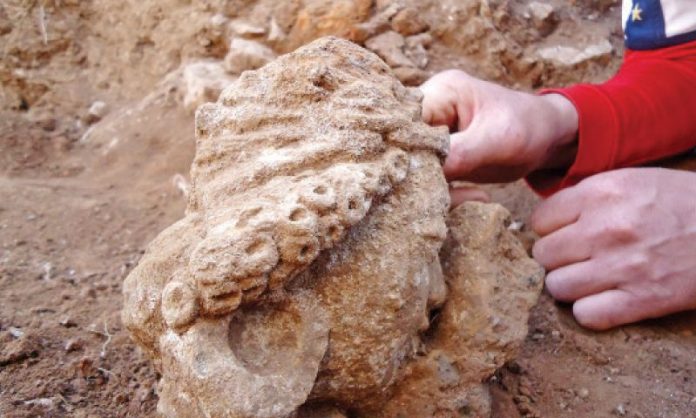 Archaeologists have discovered Buddhist sculptures and heads in Haripur district of Pakistan.

Buddhist sculptures and heads dating back to second to fifth century AD had been discovered by archaeologists during ongoing excavation at the site of an ancient Buddhist Stupa known as Bhamala Buddhist Complex.

During excavation, precious coins of Kushan period (1st century BC to 3rd century AD) were also unearthed around the Stupa.

The ruins of the Buddhist Stupa date back to the 4th century BC and it is different from other stupas found in Gandhara. It is cross-shaped and looks like an Aztec Pyramid. This main Stupa is surrounded on all sides by nineteen, relatively small, votive Stupas in the courtyard.

The Bhamala site was partially excavated in early 1930 by Sir Jan Marshal, but the site was never studied in depth again. The fresh excavation at the archeological site had been initiated by the Hazara University, Mansehra. Director of Archaeology and Museums Dr Samad said during excavation done by archaeologists, conservators, diggers, and treasury hunters, mostly terracotta sculptures had been discovered.

Bhamala archaeological site had been declared national and world heritage site. It is currently under the control of Department of Archaeology and Museums, Government of Khyber Pakhtunkhwa, Government of Pakistan. The site is believed to be one of the best preserved sites and largest surviving example of this shape in the Taxila Valley.