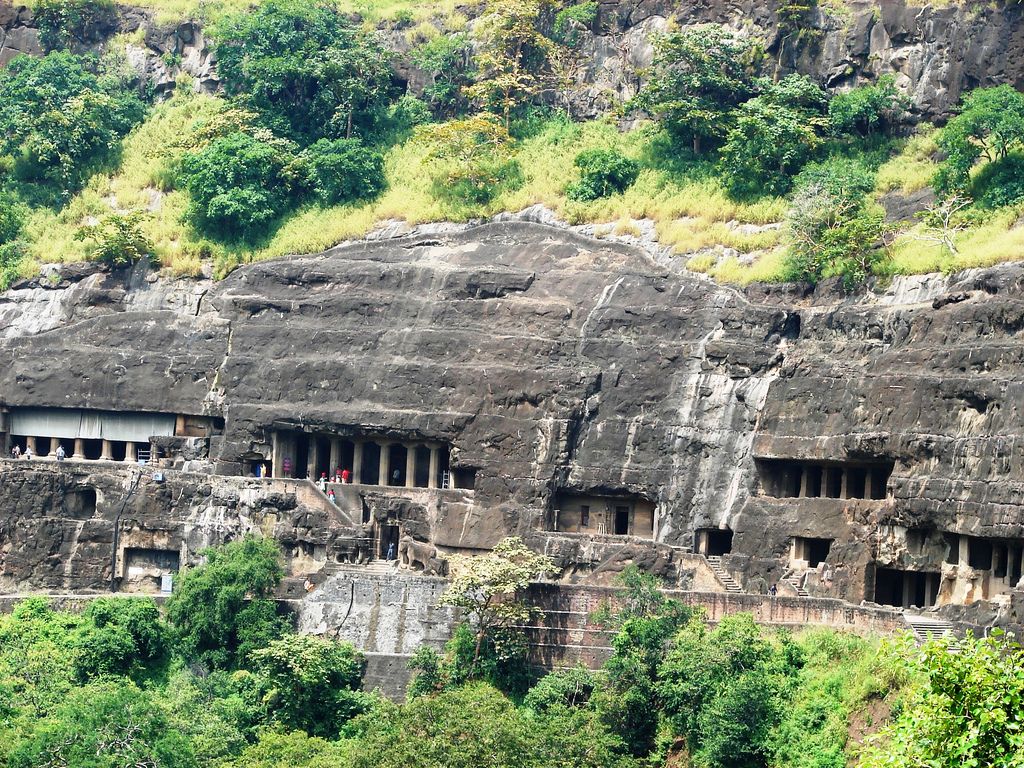 The Ajanta Caves are a series Buddhist cave temples in Maharashtra, India. Dating back to 2nd century BC the Ajanta caves preserve some of the best masterpieces of Buddhist art in India. Many visitors explore the Ajanta Caves in conjunction with the nearby Ellora Caves.

The Ajanta Caves were carved out of a solid rock along the Waghora River. The first Buddhist cave monuments at Ajanta date from the 2nd and 1st centuries B.C. During the Gupta period (5th and 6th centuries A.D.), many more richly decorated caves were added to the original group. They were used by Buddhist monks as prayer halls and monasteries. Ajanta Caves were abandoned in AD 650 in favour of Ellora Caves. Five of the caves were temples and 24 were monasteries, thought to have been occupied by some 200 monks and artisans. The Ajanta Caves were gradually forgotten until their ‘rediscovery’ by a British officer in 1819.

It is a protected monument under the Archaeological Survey of India and has been listed in the World Heritage list of monuments.

In their range of time and treatments they provide a panorama of life in ancient India and are a source of all kinds of information… hair styles, ornaments, textiles, musical instruments, details of architecture, customs etc. It was from this collection of classical Indian art that a particular style was formed that traveled with Buddhism to many parts of the world. Similar paintings can be seen in Sigiriya in Sri Lanka, Bamiyan in Afghanistan, temples and shrines in Tibet, Nepal, China and Japan.

Today the paintings and sculptures on Buddha’s life, belonging to the more mellow and ritualistic Mahayana Buddhism period, are world famous. Copies of them were shown in the Crystal Palace exhibition in London in 1866.

The first caves were hewn from the bare rock at the time of The Sātavāhana Empire which started around 230BC.  The Sātavāhanas brought peace to India after several foreign invasions and the decline of the previous, Mauryan Empire.  It is not without irony, then, that they were rediscovered by a contemporary invader and representative of a foreign empire.

Although there is widespread debate about the time at which the second period of building took place most now agree that it was probably during the reign of Harishena, from 460AD and over a period of around twenty years.  This architectural flowering saw the creation of twenty temples which were used as monasteries.

There are paintings everywhere – literally.  Every surface apart from the floor is festooned with narrative paintings.  Time has taken a serious toll on these marvelous works with many parts simply just fragments of what they were when first created.  The stories are almost wholly devoted to Jātakas – tales of the Buddha’s previous lives.  These 547 poems were painstakingly and lovingly painted on to the walls by devotees.

It has been noticed that the caves are illuminated by natural light for part of the day and it is presumed that metal mirrors or sheets of white cloth were used to reflect sunlight into the inner recesses.

No one knows for sure when and why the caves were abandoned – whether it was a gradual desertion of some event of political and social magnitude took place which precipitated the neglect and final vacation of the site.  Regardless of the reason, for hundreds of years the place remained forsaken, to be rediscovered that fateful day in 1819 by John Smith.