The Masroor temples is a unique monolithic structure and is also one of the most unexplored temples in Himachal Pradesh. It is a complex of single-rock-cut monolithic temples, in Nagara style, dated by art historians to 6–8th centuries. This holy shrine is located on the hill top at a height of about 2,500 ft from the sea level.

Masroor temple is a riddle for historians and archaeologists as its date of construction cannot be established from any credible source. There is no inscriptional mention of the patronage or period of the construction on the temple itself. Also, it has not been found in any historical account as to when this temple was constructed. The scholars in history however attribute this temple to some unknown rulers of ancient Jalandhara kingdom in the plains of modern Punjab.

According to local legend the Pandavas of the Mahabharata fame resided here during their “incognito” exile from their kingdom and built this temple. During this time, as their identity and location was exposed, they shifted from here. This is said to be the reason for the unfinished part of the temple complex.

The pond in front of the complex has a mythical link to Draupadi, the consort of the Pandavas. It is stated that it was built for her exclusive use for ablutions.

The Masroor temple complex features a group of 15 monolithic rock cut shrines; 14 temples are cut only from the outside, but central temple in this complex is also cut from the inside. In front of these temples is a rectangular pond which remains water-filled all through the year and reflects a magnificent image of these temples.

The temple complex is now also known as Thakurwada, a term for Vaishnavite temples. The idols of Rama, Lakshmana and Sita are placed inside main sanctum-sanctorum. The intricate sculptural detailing on the doors, jambs, lintels, walls, shikharas, and column capitals on the main shrine and other smaller temples consist of figurines of gods and goddesses such as Shiva, Parvati, Laksmi and Saraswati, and floral designs.

There are many lintels which depict scenes of festivals to celebrate the crowning of Lord Shiva, not seen any where else in the country. The presence of the figure of Shiva in the centre of the lintel affords a strong presumption that the Temple was originally dedicated to Lord Shiva. It seems that the temple was converted into a Vaishnava temple in recent history.

Intricate carvings and beautifully ornamented sculptures make one wonder at the skills and perseverance of the people who were responsible for cutting these shapes out of the tough sandstone rock without the support of modern technology by their sides.

This historical temple is partially in ruins because of a massive earthquake in 1905 during which many of its sikharas fell down and many pillars developed cracks. A major portion of the temple is in ruin state with various fragments lying in the vicinity.

The magnificent structure built with a cruciform design bears striking similarity with the temple of Angkor Wat in Cambodia and Kailasa Temple at Ellora.

Masroor Rock Cut temples temples are the only rock shrines in the northern part of India. Though rock-cut caves are common in South India, yet, temples cut out of free-standing rocks, known to archaeologists and art critics, are only 4 in number — Ratha of Mahabalipurum, Kailasha Temple at Ellora Caves, Temple complex at Masroor and the Dharmanatha Temple at Dharmnar. 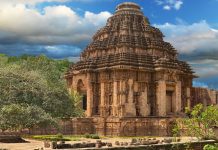 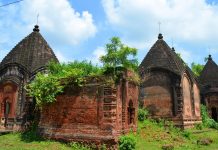 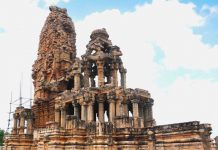 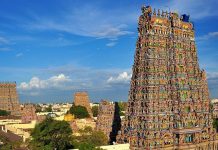