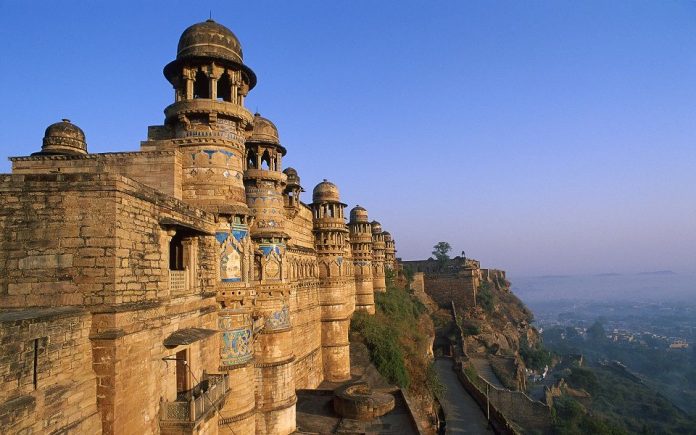 The Rajputs, Marathas, Mughals, British, Muslim rulers, Sikhs and some more may have played out their roles in India’s rich history, but they all seem to have a unique common link to a city in central India – Gwalior.

The Gwalior Fort is perched on a hilltop, near the Gwalior city of Madhya Pradesh. Regarded as North and Central India’s most impregnable fortress, the Gwalior Fort spreads out over an area of 3 square km, surrounded by 35 feet high concrete walls of sandstone. A massive structure spanning more than a square mile, Gwalior Fort houses dozens of smaller structures including water tanks, temples, shrines, monuments, and multiple palaces sheltered by thick, sandstone walls painted with bright blue accents. 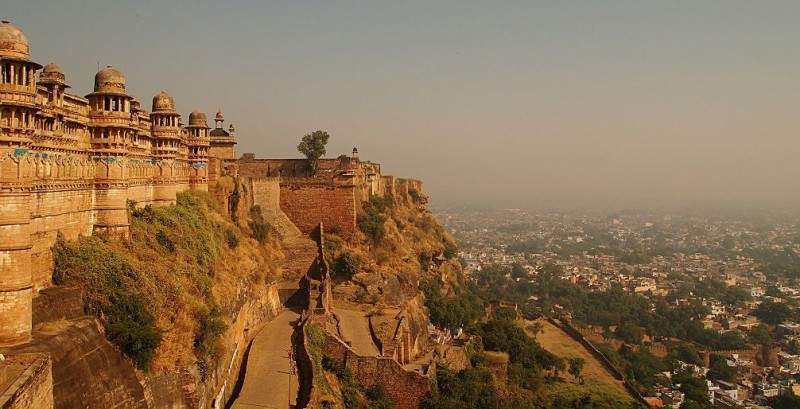 Being adhered to the conquests of various dynasties and rulers, the design of this majestic hill top had been subjected to various changes. History of Gwalior Madhya Pradesh mentions that in the 5th century the Gwalior Fort came into being during the rule of Suraj Sen, the Kachhwaha Rajput prince. In the 10th century, Vrajdaman of the Kachapghat Rajvans took over Gwalior. In 1021 AD Mahmud of Gazni attacked Gwalior and Malik Bahauddin Tughluq, one of his lieutenants won it after an intense battle.

According to the History of Gwalior Madhya Pradesh, the 14th century saw the Tomar clan coming into power taking advantage of the weak Islamic rulers. Many rock-cut Jain statues were constructed during this period. The most illustrous ruler of this dynesty was Raja Man Singh who was instrumental in rebuilding the fort of Gwalior.

Lodi took the passion of the fort shortly after the death of Raja Man Singh. After Lodi the fort went to Mogul and this place was used as a prison by Jahangir and then Aurangzeb. With the growing power of Marathas the fort came under the rule of Scindia (Maratha clan). British took over the fort on several occasions and finally it was restored to Scindia in 1886 in exchange of Jhansi.

Monuments and Temples inside Fort

The fort and its premises are well maintained and house many historic monuments including palaces, temples and water tanks. There are eleven temples to Gautama Buddha and the tirthankaras of Jainism. Below Gwalior Fort carved directly into the sandstone bedrock, a series of Jain carvings  watches the southern path leading up the hill. These carvings, the tallest over 50 feet high, were excavated between the 7th and 14th centuries.

Within Gwalior Fort are several Hindu temples, one pair known as the Sas Bahu Ka Mandir, feature beautiful bas-reliefs. This pair was finished in 1083 and although crumbling they still feature lovely interiors. The 15th Century Gujari Mahal was built by Raja Mansingh Tomar as a monument of his love for his Gujar queen, Mrignayani. The exterior of the Gujari Mahal is well preserved and now houses an archeological museum. The Teli Ka Temple, or “Oilman’s Temple” was originally dedicated to Vishnu and later converted to the worship of Shiva. Close to the Teli ka Mandir temple is the Garuda monument, dedicated to Vishnu, is the highest in the fort.

The under ground floors are designed to pass sun light and ventilation inside and there is a unique communication system to talk between floors by using hollow pipes. These underground floors were used by the queens. It was in the same palace the Mughal emperor Aurangzeb imprisoned and later murdered his brother Murad.

There are several underground escape tunnels to allow occupants of the fort to escape during the war. These underground paths had some exposed opening for light and air however with the closing of those openings it became impossible and dangerous. Now the entrances to the escape ways are closed as some incidents took place as some enthuastic tourist tried to explore.

Then there is gruesome Jauhar Kund, where the women of the harem burnt themselves to death after the defeat of the king of Gwalior in 1232.

Gwalior also has its link to Sikh history. It was here that Mughal emperor Jahangir had imprisoned the sixth Sikh Guru Hargobind Sahib Ji, along with 52 princes for nearly two years. Guru was reluctant to go alone and requested release of 52 princes who were locked inside jail for various reasons. A Sikh Gurudwara Data Bandi Chhod is constructed in memory of Guru Hargobind Sahib Ji.

Other notable structures in the majestic Gwalior Fortress are the Karan Palace, the Jahangir Mahal and Shahjahan Mahal.

Thanks for sharing it, it is really helpful.