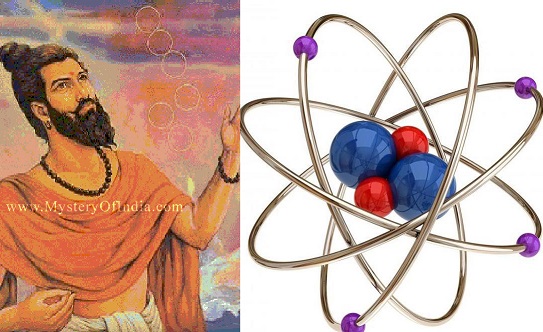 John Dalton (1766 – 1844) is the man credited today with the development of atomic theory. However, It would be surprising for many people today to know that the theory of atoms was actually formulated 2,600 years ago by an Indian sage and philosopher. The first Indian philosopher who formulated ideas about the atom in a systematic manner was Sage Kanad who lived in the 6th century B.C.

Kanad was born in 600 B.C. in Dwarka, Gujrat. His real name was Kashyap. He was the son of a philosopher named Ulka. From his child days Kashyapa displayed a keen sense of service. Minute things attracted his attention.

Once he went on a pilgrimage, he saw thousands of pilgrims littered the town roads & the banks of river Ganga with flowers and rice grains which they offered at the temple. He started collecting the grains of rice. Everybody thought he was insane as he was from a good family. Crowd gathered around him & one person asked him why was he collecting the grains even beggars wouldn’t like to touch these. He told them that individual grains in themselves may seem worthless, but a collection of some hundred grains make up a person’s meal, the collection many meals would feed an entire family and ultimately the entire mankind was made of many families, thus even a single grain of rice was as important as all the valuable riches in this world. Since then people started calling him Kanad, as “Kan” in Sanskrit means “Smallest particle“.

Kanad was the first person in the world to discuss atoms and molecules. It was Kanad who first propounded that the Parmanu (Atoms) was an indestructible particle of matter. According to the material universe is made up of Parmanu (Atoms). When matter is divided and subdivided, we reach a stage beyond which no division is possible, the indivisible element of matter is Parmanu (Atom). Kanad explained that this indivisible, indestructible atom cannot be sensed through any human organ.

This theory occurred to him while Kanad was walking with food in his hand, breaking it into small pieces when he realised that he was unable to divide the food into any further parts, it was too small. From this moment, Kanad conceptualized the idea of a particle that could not be divided any further. He called that indivisible matter Parmanu (atom).

Kanad founded the Vaisheshika school of philosophy where he taught his ideas about the atom and the nature of the universe. He wrote a book on his research “Vaisheshik Darshan“. People started calling him “Acharya” – mean Teacher and became known as “The Father of Atomic theory.”

Another Indian philosopher, Pakudha Katyayana who lived around the 5th or 4th century B.C. and was a contemporary of Gautama Buddha, had also propounded ideas about the atomic constitution of the material world.

Between the 5th and 3rd centuries BC, the atom is mentioned in the Bhagavad Gita (Chapter 8, Verse 9)

This Indian concept of the atom was developed independently and prior to the development of the idea in the Greco-Roman world. These Indian ideas about atom and atomic physics could have been transmitted to the west during the contacts created between India and the west by the invasion of Alexander. Greeks came into India only in the 4th century B.C. Thus it is quite possible that the Greeks borrowed the ideas about atom from Indian philosophers in the 4th century B.C.

It remains a fact that Indian ideas about atom are the oldest. But the credit of developing these ideas further, goes to the Greeks and other western philosophers as Indian theories about the atom are greatly abstract and enmeshed in philosophy as they were based on logic and not on personal experience or experimentation.