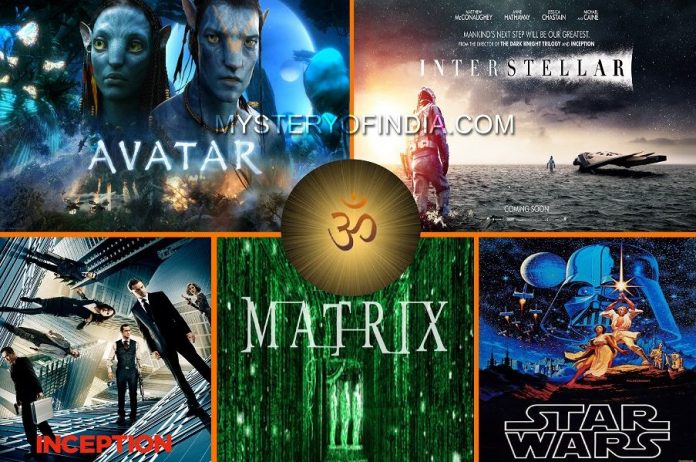 The philosophy behind a couple of super hit movies in Hollywood is based on Hinduism. Hollywood itself has actually been embracing arcane Indian systems for a long time now. A few well-known Hollywood stars have willingly and openly expressed this fact to the public.

Obvious and hidden references to Hindu symbolism can be found in many movies, including Batman, Superman and Memento. Let’s examine the plots of some movies that are based on Vedic teachings.

Well it’s not surprising that James Cameron’s Avatar has hit the all time success as it portrays the picture of a cosmic nature.
First of all the word ‘Avatar‘ is Sanskrit, an ancient Indian language, in which much of India’s literature was written. It is closely translated in English as ‘incarnation’. The term, is most widely associated in Hinduism with Lord Vishnu, the deity whose Avatar (incarnations) are often depicted as having blue skin, similar to the Na’vi in Cameron’s Avatar.

Just as Hindu gods, particularly Vishnu, become avatars to save the order of the universe, the film’s avatar must descend to avert impending ultimate doom, effected by a rapacious greed that leads to destroying the world of nature and other civilizations.

Tails of the Na’vi’s very closely resembles the Monkey people or Vanaras met by Lord Rama in the deep woods of Central India, and who became his allies under the leadership of their king Sugriva and their champion Hanuman.

Another concept found in Hindu diaspora is leaving one’s body temporarily and entering the body of another person. Something quite similar happens in the movies as Humans are able to temporarily enter the body of a Na’vi. In Hinduism, this concept is called as Parakaya Pravesham. Puranas have hundreds of stories based on astral travel or body travel.

The colour Blue is used to depict “the infinite nature of Brahman” (Supreme Spirit, because blue is the colour of the sky, ether and divinity) that is manifested through Avatars. Hence the reason, pictures of Avatars such as Rama and Krishna are blue.

Explaining the choice of the color blue for the Na’vi, Cameron said “I just like blue. It’s a good color … plus, there’s a connection to the Hindu deities, which I like conceptually.” Cameron also said “I have just loved … the mythology, the entire Hindu pantheon, seems so rich and vivid. I didn’t want to reference the Hindu religion so closely, but the subconscious association was interesting, and I hope I haven’t offended anyone in doing so.“

I wish this were a complete article. Only 2 movies are presented.

Its complete article, we fixed the issue.

Super man character influenced by our hanuma, so many characters in our purana’s are so brilliantly explained but we are not able to study those charecters in present life. Because we don’t want to respect our culture and tradotion. Governing bodies should give priority to those studies.

SantYogi
Reply to  I srinivas rao

Right… and Wonderwoman is Kali. Iron Man is Karna. Thanos is Duriyodhana. Who is Spiderman? Or Antman? I thought we had the whole Avengers mapped out to Mahabharatha. Marvel Comics is secretly run by Vyaasa. DC Comics is owned by Valmiki.

Curious that no director or creator has ever accepted this. References to one type of fiction by another is common. There are tons of references from Greek mythology as well in these and many other movies. That is the nature of movie-making. Attributing that to the so-called glory of Hindu mythology is far fetched and just meant for self gratification. Looks like the current Hindus have very little to offer except reaching back to draw outlandish claims from old Hindu tales.

Mystery of India is a culture and society website that presents facts about India, that have been erased from history. It updates regularly about matters related to India (like history, festivals, temples, sacred places, Culture, tradition, archaeology), the latest developments in Indian society and religions.
Contact us: contact@mysteryofindia.com
© Copyright 2014 - 2020 Mystery Of India
wpDiscuz
8
0
Would love your thoughts, please comment.x
()
x
| Reply
MORE STORIES