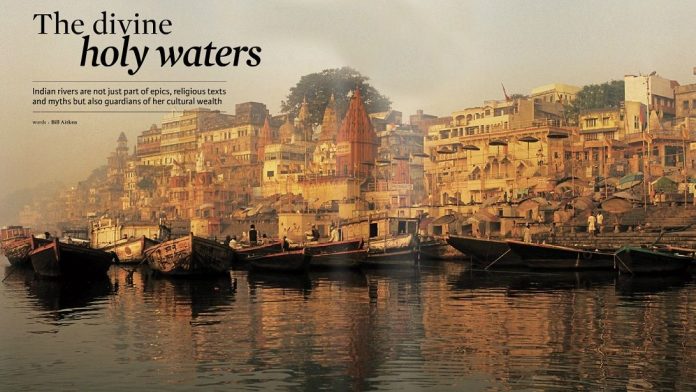 Indian Riveres are not just part of epics, religious texts and myths but also guardians of her cultural wealth. – Bill Aitken

From the beginning of recorded history, India has honoured her rivers, both for their beauty and their blessings. Seven of these rivers were singled out for recognition as goddesses, not for their hydrological proﬁle but for the sacred and cultural associations surrounding them.

First in the list is the goddess Ganga (the Ganges river). Her source at the ice cave of Gaumukh (cow’s mouth) in the Uttarakhand Himalayas must be the most inspiring on our planet for sheer aesthetic grandeur. Not even the mythology surrounding the river can match the sublime impact of its physical birth.

Starting from the pilgrim site of Gangotri, she ﬂows as river Bhagirathi. It is only on her meeting with Alakananda river at Devprayag that the name Ganga is given. Then, downstream at Haridwar, the Ganga emerges into the plains where her course to the sea is marked by the confluence at Prayag in Allahabad in Uttar Pradesh. Here Ganga is joined by Yamuna and symbolically by the third goddess, Saraswati.

Varanasi is likewise graced by the waters of Ganga Maharani. Of Ganga’s ﬂowing locks that comprise the river’s delta, the Hooghly passing through Kolkata in West Bengal, has the privilege of hosting the ﬁnal place of pilgrimage at the small island of Ganga Sagar where the goddess, after 2,525 km, merges with the Bay of Bengal.

The source of the second goddess Yamuna, the younger sister of the Ganga, is marked by scalding hot springs at Yamnotri. She rises from the snows of the Bander Poonch massif near Uttarakhand’s border with the state of Himachal Pradesh. While passing near Mussoorie in Uttarakhand, the winding course of the river has an Ashokan edict on its banks extolling the Virtues of non-violence. The goddess exits the Himalayas at Paonta Sahib, a Sikh pilgrimage hallowed by the residence of the Sikh Guru Gobind Singh.

Its waters help give the state of Haryana in India its name signifying dazzling greenery. Once it nears New Delhi, the capital of India, the goddess is assailed by urban challenges. Downstream of the capital, the river ﬂows past the ghats at Mathura in Uttar Pradesh where the votaries of Radha and Krishna gather. It curls round the dreamy proﬁle of the Taj Mahal at Agra in Uttar Pradesh, then Winds her way through eroded terrain Where the Chambal joins her. Finally, before the auspicious meeting of the rivers at Prayag, 1,370 km from her source, the Yamuna is refreshed by the blue waters of the Betwa.

Godaveri, Ganga’s elder sister, is a non-Himalayan river. Her flow is seasonal. She drains the lesser ranges of Deccan Plateau which receives little precipitation outside the moonsoon. Her source is atop the black mesa formations of the north Sahyadri range. At the foot of these mountanis is the sacred Trimbakeshwar Temple near the town of Nasik is the state of Maharashtra.

The river flows for 1,465 km across almost the width of penisula from Nasik in the Western Ghats to cut through the Eastern Ghats leading to Yanam which was a former colonial outpost of Puducherry in Andhra Pradesh. The small town of Paithan in Maharashtra lay on an ancient trade route and is famous for heavy silk Saris.

Shirdi is another small town near the Godaveri that has become a place of pilgrimage. Downstream is the well-maintaned Gurudwara at Nander where Guru Gobind Singh breathed his last. The southeast flow of the river after it leaves Maharashtra for the state of andhra Pradesh is supplemented by river Manjra from south and Pranhita and Indrawati from the tribal districts lying to the north. The Goddess takes a sharp turn at the Bhadrachalam Temple in Andra Pradesh before cleaving a passage through the Eastern Ghats. She then descends in a broad southerly flow to the agricultural town of Rajahmundry in the state of Andhra Pradesh which marks the entrance to the fertile delta. Here the Draksharama Temple commanding the Gautam Godaveri delivers final blessings before the goddess flows via Yanam into the Bay of Bengal.

Narmada, daughter of Lord Shiva, is to many the most beatiful. Her source is at Amarkantak amidst the leafy Maikala Hills of eastern Madhya Pradesh. It then passes through tribal territory thick with bamboo and rich in iron ore. At the medieval fort of Mandla in Madhya Pradesh, the river broadens out.

The erstwhile ruling dynasty of the area boast of being the last to hold out against the Mughal advances. Near Jabalpur in Madhya Pradesh are the Dhuandar waterfalls in the fabled marble gorge. The many hues of marble are said to be auspicious for carving temple images. Large smooth basaltic lingams are also found in Narmada’s bed.

Jabalpur lays claim to inventing snooker; it is said to have first been played here in colonial times. Omkareshwar is a scenic island with an ancient jyotirlinga Temple and in contrast, this pilgrim site is followed downstream by the princely bathing ghats at Maheshwar. These were built by the widowed Holkar queen Ahalya Bai of the Maratha—ruled Malwa kingdom who bravely stood up for her family faith in the face of bigotry.

Lower in its course, the river is dammed to form the Sardar Sarovar, a gravity dam near Navagam in Gujarat. Finally, at the estuary town of Bharuch in Gujarat, it flows into the Arabian Sea.

The holy river Saraswati is the Hindu goddess of learning. Beautiful to look upon, Saraswati holds the ancient stringed veena and is seated upon a swan. In ancient scriptures, Saraswati was a broad river that used to water what is now the Rajasthan desert.

It was discovered under the sand in the 1930s from the remains of the Harappan civilisation. According to satellite imagery, the course of the dried-up river can still be discerned and in Hindu folklore, the Saraswati remains very much alive.

Recently, at Ad Badri in the Shivalik foothills of Haryana, the source or a small river, known as the Sarsutti, has been developed as a pilgrim centre. Both Kurukshetra in Haryana and Pushkar in Rajasthan have lakes associated with this lost sacred river and host huge gatherings of pilgrims on auspicious bathing days. It is assumed that the Saraswati flowed into the Rann of Kutch in Gujarat and then into the Arabian Sea.

The indus gave its name to india — foreigners referred to it as the land that lies “beyond the Indus.” Also known as the Lion River, the Indus (or sindhu) is the largest in the subcontinent, ﬂowing for 3,200 km from undistinguished springs in Tibet, north of Mt Kailash.

The ﬂow of the river is determined by season — it diminishes in winter while ﬂooding its banks between July and September. This mighty river delimits the western end of the Great Himalayan range and the towering height of the Naga Parbat massif at the river’s sharp turn to outﬂank the mountain astounds all who behold it. From Tibet border, it flows northeast through Leh past the town’s huge and Fascinating mud fort. At Nyemo, the Zanskar River joins the Indus at perhaps the most sublime conﬂuence in the Himalayas.

The river is worshipped by fishermen downstream in the Pakistan province of Sind where the shallow and sluggish indus reaches the Arabian sea.

Goddess Kaveri may be the shortest in length (765 km) but is the guardian of the most scintillating array of India’s cultural wealth. Known as the ‘Ganga of the South’, the goddess is depicted standing wearing a red silk sari and holding a copper water pot from which she pours her blessings.

Kaveri (or Cauvery) rises in the hills of Coorg in the Karnataka section of the Western Ghats above the temple at Bhagamandalam. The source is known as Talakaveri and a small tank has been built to receive the overﬂow from the sacred spring. From the wooded hills of Coorg, the river flows to the conﬁnes of Mysore, then past Srirangapatnam in Karnataka where Tipu Sultan had his palace. On the banks of Kaveri at Talakad near Mysore in Karnataka stands a strange spectacle of medieval temples silted up by the sand and wind.

The goddess in her regal mood is seen at the spectacular Shivanasamundra Waterfalls and then again at the dramatic cataracts of Hogenakkal near the border of Tamil Nadu. As she approaches the delta region, the goddess unleashes a display of artistic, architectural and musical wonders. Trichy’s fort, the devotional rendering of Tyagaraj’s songs at Thiruvaiyaru in Thanjavur district in Tamil Nadu, Sriramgam’s extensive godly enclosure, the exquisitely poised bronze images of Cholan ﬁgures and Thanjavur’s towering temples and are a few of the living treasures of the delta region. The recognised channel of the Kaveri debouches into the Bay of Bengal near the coast at Poompahar in Tamil Nadu known to Roman traders as Kaveri Emporium. 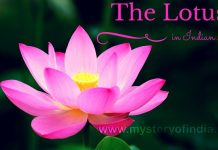 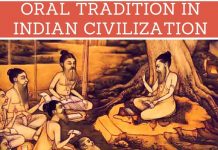 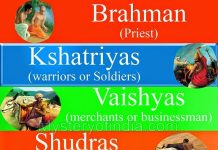 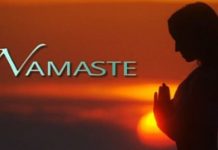