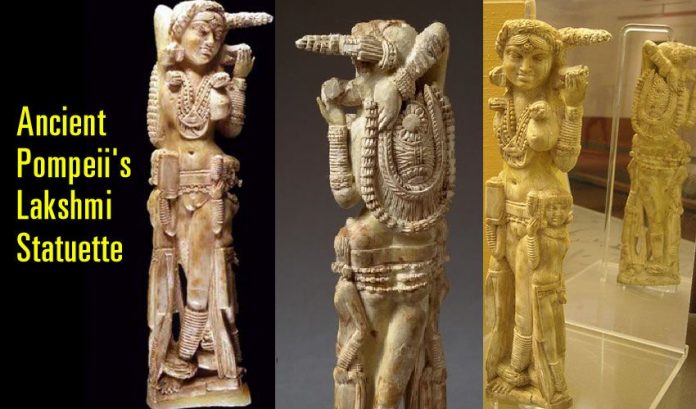 In 1939, Italian archeologist Prof Maiuri, discovered an artifact in the ruins of ancient Pompeii, that had a very Indian origin. This ivory statuette which survived the disaster and lasted all these 2000 years was identified by Prof Maiuri as that of the Goddess Lakshmi and dated to around 1AD. It has since then been quoted as the ‘Goddess Lakshmi statue in Pompeii’ in many books & articles.

The statue portrays Lakshmi, Indian divinity of feminine beauty and fertility. It wears scanty, transparent clothing that accentuates the contours of her body and sharply contrasts with her abundant jewelry. Her body is adorned with heavy jewels: a diadem on her forehead, a necklace on her chest and large and numerous rings on her ankles and wrists. Her long hair, also richly embellished, flows over her shoulders down to her waist. In this respect she compares closely with female figures sculpted on Buddhist monuments at prominent monastic sites such as Bharhut (late 2nd c. BCE.) and Sanchi (50-25 BCE) in central India as well as Karle (50-75 CE) in western India.

She seems to raise her left hand in order to support the enormous weight of the conical earring in her left ear. Similar earrings are depicted on terracotta figurines that circulated in eastern India during the 3rd-2nd centuries B.C.E. and a shell example has been discovered at the site of Kausambi in northern India.

A heavy, multi-chained necklace with a triangular pendant shaped like a lotus blossom falls in between her breasts, while two more lotus forms protrude from the necklace immediately below each shoulder. In ancient Indian mythology, lotuses were considered to be symbols of the cyclical nature of creation and perfect embodiments of the cosmos.

The letter ‘si’, which is inscribed on the statuette’s base in kharoshthi (a script commonly used in northwest India), together with the emphasis on adornment may lead us to identify this figure as Sri Lakshmi, the goddess of beauty, prosperity, and abundance. 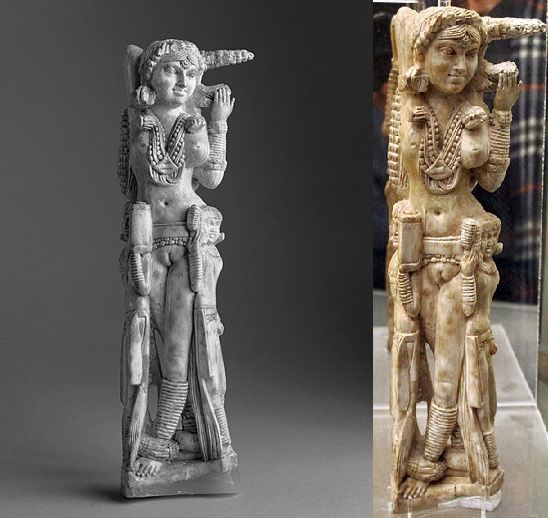 Richly adorned female figures were particularly popular subjects in ancient Indian art and literature. By the 2nd century B.C.E. portable figurines and plaques made of terracotta, bone, and ivory featuring bejewelled female figures were produced and widely distributed throughout India. Similar figures were sculpted in stone, either independently or paired with male figures, and placed on exterior walls, gateways, and railings of Buddhist monuments all over the Indian subcontinent. Additionally, in secular texts composed during the first half of the first millennium C.E., notably in Vatsayana’s Kamasutra, ideal images of beauty were prescribed for both men and women.

The heavily ornamented female figure at the center of this portable ivory statuette found in a residence on the Via della Abbondanza in Pompei clearly belongs to this genre of images from the Indian subcontinent.

The figure’s exact identity is quite unclear. However in terms of iconography and technique, the closest comparisons can be made with ivory figurines recovered from the central and northwestern parts of the sub-continent and datable to the 1st century A.D. Two of these examples were found at the sites of Bhokardan and Ter in central India and a third was excavated in Begram, Afghanistan along with a large cache of ivory, bone, glass, and metal objects.

Although these four figurines are not perfect matches, their shared iconographic and compositional features suggest that they may have been produced in the same region (probably central India) before being distributed to other regions.

This small, rare sculpture, found in a modest dwelling in Pompeii, represents nonetheless an important indication of a trade relations that existed already by the 1st century A.D. between the Roman Empire and India.

The Romans imported many goods from India and at the same time set up their own trading stations in the country. A particularly famous one was at Arikamedu (near modern Pondicherry), where Roman coins, amphoras and roman glass have been found.

Moeller (The wool trade of ancient Pompeii Walter O. Moeller Pg 76) feels that there existed a trade of dye stuff between Indian and Pompeii based on the fact that the building next door to the one that housed the statuette was a dye house. So he feels that the statue perhaps came together with a shipment of Indigo dyes.

Amazing! This little statue survived the intense heat of the lava, the disaster and is now a testament to the trade relations between the ancient Rome & India dating back over 2000 years.

Excellent article. You have given a new proof of Ancient Vedic Empire Of India in Italy. Do you have some kind of report on this which is published by any historical society in Pompeii or any kind of report on this excavation published by Italian Govt. Please confirm.
Thanks once again for posting such a profound article.
Please confirm and reply
Regards
Shrirang Sudrik
Pune Maharashtra India
Mobile : +91 09011350747