India was one of the first issuers of coins (circa: 7th/6th century BC), and as a result it has seen a wide range of monetary units throughout its history. There is some historical evidence to show that the first coins may have been introduced somewhere between 2500 and 1750 BC. However, the first documented coins date from between the 7th/6th century BC to the 1st century AD.

The Hindi word rūpaya is derived from Sanskrit word rūpya, which means “wrought silver, a coin of silver“.

Over the next few centuries, as traditions developed and empires rose and fell, the country’s coinage designs reflected its progression and often depicted dynasties, socio-political events, deities, and nature. This included dynastic coins, representing Greek Gods of the Indo-Greek period followed by the Western Kshatrapa copper coins from between the 1st and the 4th Century AD.

In 712 AD, the Arabs conquered the Indian province of Sindh and brought their influence and coverage with them. By the 12th Century, Turkish Sultans of Delhi replaced the longstanding Arab designs and replaced them with Islamic calligraphy. During his five-year rule from 1540 to 1545, Afghan king Sher Shah Suri issued a coin of silver, weighing 178 grains, which was termed the Rupiya.

The silver coin remained in use during the Mughal period, Maratha era as well as in British India.

The princely states of pre-colonial India minted their own coins, all which mainly resembled the silver Rupee, but held regional distinctions depending on where they were from. During the late 18th Century when political unrest occurred, agency houses developed banks such as the Bank of Bengal and Bahar, The Bank of Hindustan, Orient Bank Corporation and The Bank of Western India. These banks also printed their own paper currency in the Urdu, Bengali and Nagri languages.

The period before 1861 was of free banking in which established banks were at liberty to issue bank notes. The semi—government owned Presidency banks dominated this activity as their notes were accepted by the Government. For this privilege, Presidency banks had to submit themselves to the legislative controls including restrictions on the kind of business the banks could engage in. The limits of the note issue were determined as a proportion of the capital as well as cash in hand.

Early bank notes were issued in denominations then deemed convenient. Banks based around Calcutta (now Kolkata) issued notes denominated in Sicca Rupees as well as in gold mohurs. Towards the end of the 18th century, one gold mohur was equivalent to 16 Sicca Rupees in Bengal and this ratio formed the rationale for the issuance of some early notes in denominations of four, eight and 16 rupees, e.g. the note issues of the Bank of Hindostan. These denominations also represented the system of bimetallism in vogue during the period (early 19th century). Banks based in Madras (now Chennai), issued notes denominated in Arcot Rupees as well as the gold Star Pagodas.

In 1818, these monetary units in Madras were replaced by silver rupee weighing 180 grains troy (11.66 g) containing 165 grains of fine metal. By 1835, the Rupee was standardised to this specification on the basis of Indian Coinage Act 1835. Thereafter, notes were denominated in Comapany’s Rupee; by the mid-19th century, the prefix was dropped and merely Rupee retained.

With the establishment of the Reserve Bank of India (RBI), asset backing for the note issued came to be governed by section 33 of the RBI Act which originally prescribed a proportional reserve of gold and sterling securities against note issue. At least 40 per cent of total assets backing note issue were to be in the form of gold coin and sterling securities of which gold coin and bullion was not to be less than RUPEE 40 crore in value with gold being valued at RUPEE 18.23 per 10 g.

Financial instruments, especially the bills of exchange known as Hundis, have a venerable history. However, paper money, in the modern senses, traces its origins to the late 18th century. Among the earliest note issues were those by the Bank of Hindostan (1770-1832), the General bank in Bengal and Behar (1773-75), the Bengal Bank (1748-91) etc. Few of those notes survived. With the establishment of semi-government banks in the 19th century (the Bank of Bengal, the Bank of Bombay and the bank of Madras alluded to as the Presidency banks) paper money came to enjoy wider circulation, though restricted to a small class of privileged users. 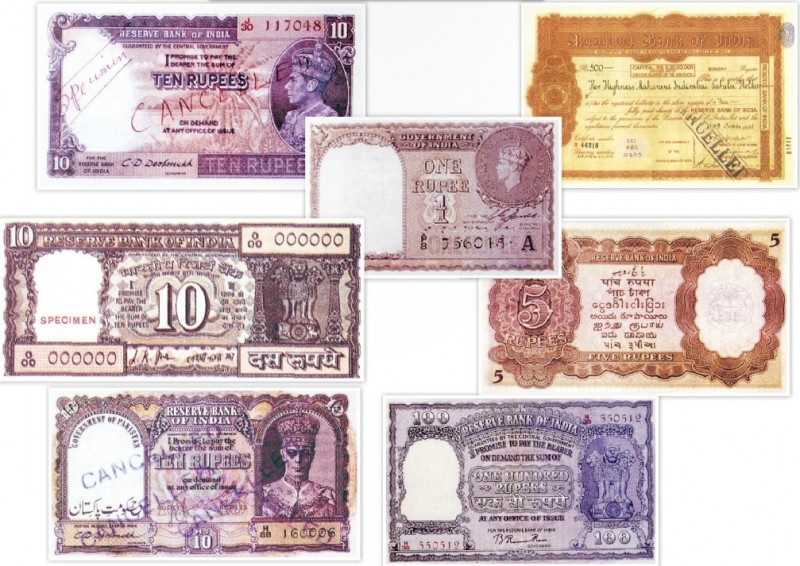 Independence also brought with it the trauma of Partition of country into India and Pakistan. The transition of currency management from colonial to independent India was a reasonably smooth affair despite the considerable dimensions involved. In August 1947, the notes in circulation in undivided India amounted to ₹1,181 crore (₹11.81 billion). The task was to replace Indian notes and coins circulating in the newly- formed Pakistan with distinct notes and coins of the new state and apportion assets against the liability of the notes issued.

The bank issued from April 1 to June 30, 1948, inscribed bank notes in the denominations of ₹2, ₹5, ₹10 and ₹100 and inscribed Government of Pakistan one rupee notes and Pakistani nickel rupee and other subsidiary coins of distinctive design.

These notes and coins were to be legal tender in Pakistan only. The arrangement for the Reserve Bank to continue as currency authority of Pakistan was terminated on June 30, 1948. The State Bank of Pakistan was established on July I, 1948.

The task in India was simpler. Between Independence and the declaration of the Indian Republic on January 25, 1950, RBI continued to issue the extant notes. The first note issued by Independent India was the One Rupee note issued by the Government of India in 1949 with KRK Menon as the signatory. RBI issues coincided with the declaration of the Republic. The Bank was nationalised on January 1, 1949.

Symbols for Independent India had to be chosen. At the outset, it was felt that the King’s portrait be replaced by a portrait of Mahatma Gandhi. Designs were prepared to the effect. In the final analysis, the consensus moved to the choice of the Lion Capital of the Ashoka Pillar at Sarnath in lieu of the Gandhi portrait. The new design of notes was largely along earlier lines.

In 1951, Hindi was displayed prominently on the new notes. The debate regarding the Hindi plural of Rupaya was settled in favor of Rupaiye. High denomination notes (₹1,000, ₹5,000 and ₹10,000) were reintroduced in 1954. India reformed its monetary system in 1957. In the earlier system, one rupee was divided into 16 annas and one anna consisted of 4 pice; one pice equalling 3 pies. Thus, one rupee consisted of 64 pice or 192 pies. A commemorative design series in the honour of the birth centenary Mahatma Gandhi was issued in 1969, depicting a seated Gandhi with the Sevagram Ashram as backdrop. The designs and sizes kept changing over time. 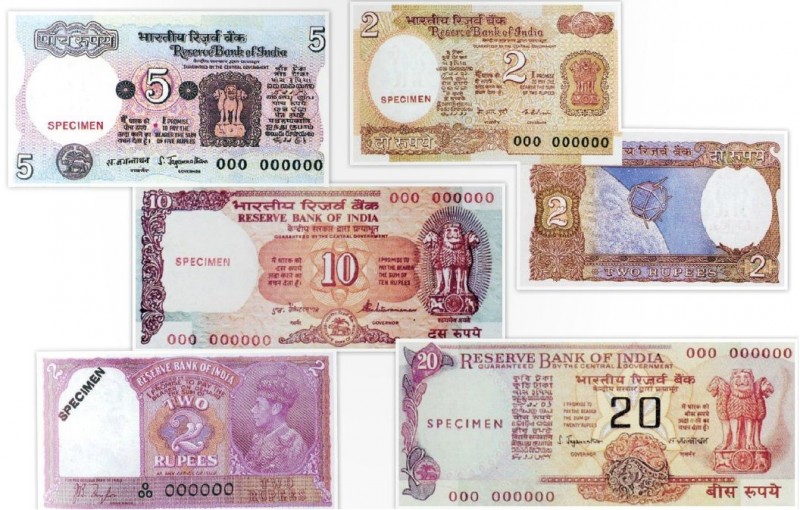 The modern rupee is subdivided into 100 paise (singular paisa). The Indian rupee symbol ‘₹’ (officially adopted in 2010) is derived from the Devanagari consonant “र” (ra) and the Latin letter “R”. The first series of coins with the rupee symbol was launched on 8 July 2011.

Good Article. Since India dominated the entire world for millions of years in ancient times India must have other currency also in use. I will try to find the same from Ramayana or Mahabharata. You also keep on searching
Regards
Shrirang Vishnu Sudrik
Pune Maharashtra India

Umm… MILLIONS of years? Really, Mr Sudrik? The very roughest form of the Human Being is at best 200 thousand years old, in other words, less than a quarter of a million. And when you talk of CIVILIZATIONS, the oldest is less than 10 thousand years old (in other words, one hundredth of one million). That's a far, far cry from even ONE million, let alone multiple millions.

i jst missed the pictures of 10 and 20 coins that were made of brass.