The ageing crumbling walls and the creeper adorned sculptures of the silent ruins of the once glorious Gomateshwara temple at Manthani will make you feel like you have been transported straight into an Indiana Jones movie.

The place was once a centre of Vedic learning, the village was believed to have been once occupied by scholars of the Vedas. Manthani is popularly believed to house a thousand Brahmin families or Sahasra Brahmana Gadapa.

The old people here say that “Manthani” refers to a pot of buttermilk. Just like butter-milk gets churned into a pot so were the Vedic Mantras that used to churn in this village. So Manthani got its name from Mantra-Mathana, meaning churning of the Mantras.

This temple is mainly dedicated to Lord Shiva, which is also stated as Gautameswar. A big Shiva linga of about 1.25 m, made of black stone is enshrined in the sanctum sanctorum on a beautifully carved ‘Panawatika’ (platform or pedestal) according to ‘Somasutra’. Lord Ganesh is installed in the inner right corner in between the entrance room and sanctum sanctorum. A big Nandi idol, beautifully carved in black stone, can be seen in the entrance room. The ears and nose of the Nandi are said to have been destroyed by Muslim invaders.

The temple is quite fragile at this point of time, but the idol of Lord Shiva and his bull is quite prominent even now. The temples have sunk into the ground, ceiling and walls have collapsed, the sculpture has faded, creepers and overgrowth have taken over.

The Manthani village is surrounded by the sacred Godavari river in the northern side, Bokkala Vaagu in the south, a lush green reserve forest in the east and Ravula Cheruvu – a small lake in the Western side.

The Manthani temples are reminiscent of early Buddhist and Jain cultures, which makes it clear that Manthani was an important center for Jainism and Buddhism.

As per the latest historical evidence, there is no such history of who constructed this temple. However, the idol of Lord Shiva is more or less similar to the Thousands Pillar Temple, which is located in Warangal. It is also stated that the Kakatiya rulers might have renovated the old temple in order to create a new look.

It is said that Aadi Shankaracharya (A.D.788-820), who visited Manthani, was pleased to see the ceaseless recitation of Vedic Mantras in the village and recognized it as a Dharma-Pitham. The subjects like Vedas, Logic, Grammar, Astrology, Chandassu and Mimamasa are said to have been taught here by the scholars in Sanskrit.

Even today Manthani is famous for Vedic Ghanapathis and the scholars well-versed in Agama Sastras and Dharma-sutras.

The temple of Manthani in the state of Telangna has a rich cultural heritage as far as historical, archaeological and religious aspects are concerned. The other temples in Manthani are Laxmi Narayana Swamy temple, Saileshwara Temple, Mahalaxmi Temple, Vinayaka Temple, Gautameswara Temple, Dattatreya Temple, Ramalayam temple, Saraswati Temple, Omkeshwara temple and Panchayatanam Temple. 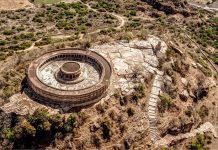