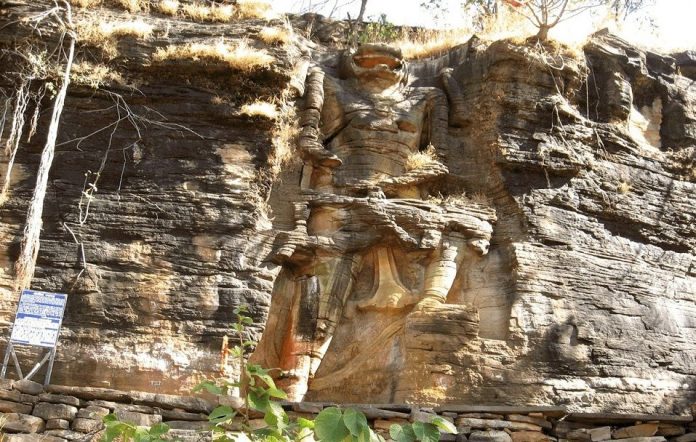 In the Lalitpur district of Uttar Pradesh is the ancient village of Dudhai, which is home to an astounding Statue of Lord Narasimha . Cut into the rock face of a hillside way off the beaten track, relatively few pilgrims search out this hidden treasure. Although it is listed as a sacred site by the Archaeological Survey of India, little documentation is available about the sculpture.

The rock-cut Narasimha of Dudhai stands over thirty feet tall, and is masterfully sculpted to take advantage of the natural striations in the rock formation, which add to the design of the Statue. The demon Hiranyakasipu is stretched across the Lord’s lap, being composed of natural stone that is silhouetted by the bas relief rock-cut design.

In terms of detailing it has some exceptional aspects. The lines of rock have been drawn to a fine point and some articles of clothing and a necklace stand out. The ferocity of the Narasimha avatar is typified by the teeth drawn back in a snarl.

A split column is beautifully executed in the Statue, and the sculptor took full advantage of the natural colors in the rock face, which emphasize certain aspects of the Statue design. Overall, this massive image is so camouflaged by its natural surroundings as to be almost invisible, until one gets relatively close, and views it from the right angle.

Research on the statue proved quite futile with the complete absence of documented material on this site. Most Narasimha-centric places of worship are located in south India with just a few scattered sites in the north and central India. Given the lack of material, it was difficult to pin down the time of its creation.

However, based on other cave excavations in the area, this rock-cut Statue of Lord Narasimha is thought to have been created in the Gupta period (320 CE–550 CE), when the worship of Lord Vishnu was at a high. The Dashavatara temple at nearby Deogarh and the huge standing Varaha (the wild boar incarnation of Vishnu) statue in the Udaygiri caves in Madhya Pradesh are two cases in point. Both date to the Gupta period and both are classic examples of the iconography that was used to depict the incarnations of Vishnu. That the Dudhai Narasimha would belong to this period can only be taken as a logical conclusion, though more research is needed to find a more precise date.

Going beyond the statue, Dudhai remains an interesting place. Though a nondescript village today, it must have been a significant place once given the number of temples around the area as well as the grandeur of their architecture. The most significant site comprises a set of Hindu and Jain temples with awe inspiring iconographic detailing on each structure. We can only hope that the ASI (Archaeological Survey of India) will enforce strict protections for this exceptional Lord Narasimha sculpture.

Very very useful information regarding the Narasimha statue. Most of South India
will have in their hills rock cut Narasimha avatar statues in Ahobhilam, Sholingur, Singaperumal Koil (these two near Chennai) etc.

This could be the remains of a Pre-Ashokan civilization. Ashoka persecuted Brahmanism and destroyed all the temples, pathashalas and gurukulas because he was declared a Non-Arya and an alien for committing fratricide and resurrecting the Rajasooya Yajya (beheading the defeated kings and offering their heads as ahuthi in the Yajnya to become the Chakravarthi) of the Shukla Yajur Veda period to replace the Ashwamedha Yajna (Consensual selection of a Chakravarthi) of the Krishna Yajur Veda Period thus bringing Bharatha Varsha (Treaty of Bharatha) and Aryan Constituton to an abrupt and violent end. He also replaced the Saffron Swasthika (Yantra of… Read more »

We don’t agree with your views… First of all there is nothing like Aryan Civilization, its a myth. And there were no Hindu temples which dates back to Pre Maurya times. Concept of Hinduism was completely different than what Hinduism is right now. Present days Hinduism and Hindu temples were evolved during Gupta Empire.

Ashoka Destroyed Hindu temples is conspiracy… nothing else