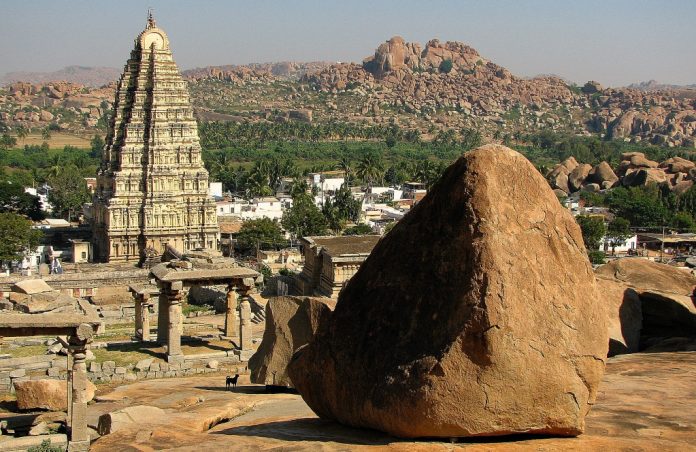 Ancient Vijayanagar, now known as the village of Hampi was the capital of the greatest and one of the most famed Hindu Kingdom of Vijaynagar. Located in the northern part of the state of Karnataka in South India, the village of Hampi has some extremely captivating ruins, intriguingly intermingled with large boulders that rear up all over the landscape.

Although in ruins today, this crumbling metropolis was once one of the most beautiful cities in its time. Hampi once boasted of a treasure trove, reflected in its lavish Dravidian temples and palaces, and under the rule of king Krishnadevaraya, it became the seat of re-establishment of Indian culture with a flourish for music, art, sculpture, and literature.

The name “Hampi” is an anglicized version of the Kannada Hampe (derived from Pampa). The name hampi can also mean “champion”. Over the years, it has also been referred to as Vijayanagara and Virupakshapura (from Virupaksha, the patron deity of the Vijayanagara rulers).

The Vijaynagar Empire was established in 1336 by Harihara I and his brother Bukka Raya I of Sangama Dynasty under the guidance of Saint Madhva Vidyaranya. The kings of Vijayanagara were popular for their encouragement to the fine arts and renovation of temples.

Hampi has a core area of 42.8 sq KM, but with the buffer zone, it adds up to 236 sq KM. The site is spread on the north and south of the Tungabhadra River linking two districts. Millions of years of volanic activity and erosion have resulted in this fascination landscape.

While most of the architecture is inspired by the Vijaynagara Empire (1336-1646), there are some construction which predate it, like the Jain temples on Hemakuta Hill. Hampi has palaces, aquatic structures, ancient market streets, royal pavilions, treasury buildings, fortified walls, gates and towers, palaces, stables and a beautiful stepwell. A number of stone aqueducts connect around 20 wells and ponds here. In fact, the whole of Hampi is crisscrossed with a network of canals of varying sizes that connect everything – Temples, palaces, agricultural lads… These are still used for irrigation.

Hampi still has a complete chariot made of stone, along with a large statue of Narasimha, one of the Avatars of Lord Vishnu.

With large dimensions, florid ornamentation, bold as well as delicate carvings, stately pillars, magnificent pavilions and traditional depictions of the Ramayana and the Mahabharata, Hampi temples stand a class apart. Each has its own speciality. There are interesting motifs of marine creatures on the Malyavanta Raghunathaswamy Temple walls.

Virupaksha Temple is the largest existing temple here and has been extensively renovated. Its nine gopurams (towers) rise above all structures at Hampi.

The Vithala Temple Complex of Hampi images the true story behind the empire’s encouragement for art and music. This splendid structure, though ruined by Mughal invaders, has musical pillars, a stone chariot with revolving stone wheels and several monolithic pillars. Its slender pillars emit musical tones when tapped. The British wanted to check the reason behind this wonder and so they had cut two pillars to check anything was there inside the pillars that was producing the sound. They had found nothing but hollow pillars. Even today we can see those pillars cut by the British. It is shrouded in mystery as Vithala Temple was built after the destruction of the capital, but no one knows under what circumstances.

The Lotus Mahal, a symmetrical open-air pavilion which is one of the best preserved sites in Hampi. The gracefully arched building is framed by extensive grounds and a watchtower in the distance. The archway, balcony and domed construction resemble a half-open lotus bud. Nearby are elephant stables, 12 chambers that would have fit two elephants each, now stand empty and silent.

Bheem’s gateway is an imposing edifice named after the mighty Bheema, one of the five Pandavas from the Mahabharata. It depicts Bheema with his wife Draupadi along with scenes from the epic. Its smart design has won praise – it looks like a blind spot and has sudden turns that made it diffcult for an invading army on horse and elephant to manoeuvre.

The Hazara Rama Temple complex has elaborate frescoes, a sprawling courtyard and well-laid gardens. Over a thousand carvings depict the Ramayana.

Krishna Temple Complex has been recently excavated, restoration work still in progress. There is a sacred tank or the Pushkarani located on its eastern side.

Underground Shiva Temple was excavated quite recently and being completely underground the entire sanctum and most parts of the temple are under water.

The Queen’s Palace is located at the middle of Zenana (female) enclosure and is largest palace base excavated in the Hampi ruins.

The monolith of Narasimha is carved out of a single boulder and depicts Vishnu in his Narasimha avatar—half man, half-lion. The Lakshmi carving was damaged during the Deccan sultanate invasion of Hampi.

Hampi formed one of the core areas of the capital of the Vijayanagara Empire from 1343 to 1565, when it was finally laid siege to by the Deccan Muslim confederacy. The victorious Muslim armies then proceeded to raze, depopulate, and destroy the city and its Hindu temples and icons over a period of several months. Despite the empire continuing to exist thereafter during a slow decline, the original capital was not reoccupied or rebuilt. It has not been occupied since.

Click on photographs to see some amazing architect of the forgotten kingdom:

Loved the post, I too visited Hampi couple of months back. Its a must visit if you are in Karnataka.
http://www.voyage361.com/2015/09/vitthala-temple.html