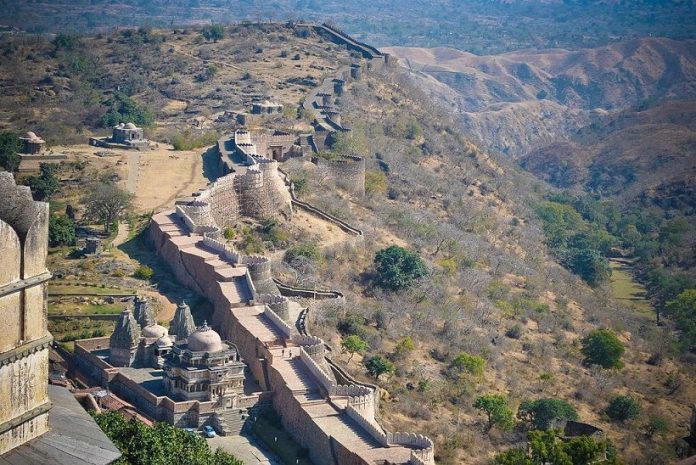 The wall that surrounds the ancient fort of Kumbhalgarh is one of the best-kept secrets in India, and perhaps the world. Protecting a massive fort that contains over 300 ancient temples, the wall was constructed by Rana Kumbha in 15th century.

Often referred to as Kumbhalgarh Wall or simply as Kumbhalgarh Fort as a whole, the wall is perhaps best known by its most sensational — and fitting — name: The Great Wall of India. This is appropriate, as the wall extends over 36 Kilometers around the perimeter of the fort, making it the second-longest continuous wall on the planet after the Great Wall of China.

Standing majestically on the high ridge with elevation of 1100 metres (3600 feet) above sea level, it represent the past glory of the Rajput rulers. The wall, which runs through mountain cliffs and valleys, is a great example of architectural brilliance of the Rajput era proved by the fact that in spite of being around 700 years old it is still intact and is in a good shape.

Kumbhalgarh is located in southern Rajasthan in western India. During the time of Rana Kumbha, the kingdom of Mewar extended from Ranthambore to Gwalior, including vast tracts of present-day Rajasthan and Madhya Pradesh. Out of the 84 forts in his dominion, Rana Kumbha is said to have designed 32 of them, of which Kumbhalgarh is the largest and most elaborate. The fort was built to serve a refuge for Mewar rulers in times of strife.

The great wall was built around the fort to protect it from invasion. The wall is massive, and breathtakingly majestic as it snakes through valleys and along mountaintops. Although at certain points the walls look fairly thin, in some places they are over 15 feet wide and beautifully masoned with thousands of stone bricks and decorative flourishes along the top.

The fort is also protected by 13 mountain peaks of Aravalli range. The fort can be accessed by any of the seven gates which are named as Aret Pole, Hanuman Pole, Ram Pole, Vijay Pole, Nimboo Pole and Bhairon Pole.

More than 360 temples are protected within the precincts of the fort. Sixty or so of the temples are Hindu, and the others are Jain temples.

It is said that in the days of the Rana Kumbha, the walls held so many lamps that consumed fifty kilograms of ghee (oil) and a hundred kilograms of cotton to provide light for the farmers who worked during the nights in the valley.

The Fort is also known for its famous palace that resides on the top of structure. This beautiful palace is known as ‘Badal Mahal‘ or the Palace of Cloud. It is also accredited to be the birth place of great warrior Maharana Pratap,  who was one the of the greatest warrior kings of Mewar.

It is said that the history of the place where Kumbhalgarh Fort was built dates back to the 2nd century, the Mauryan Era of ancient India.

Yet, despite its size and its history, the Great Wall of India is almost unknown outside its region.

This fort is inducted in the list of UNESCO World Heritage Sites in the month of June, 2013 along-with five other hill forts of Rajasthan.

Occupied until the late 19th century, the fort is now open to the public. It is the most important fort in Mewar after Chittorgarh. The fort also provides a panoramic view of the countryside. From the top of the fort one can see a beautiful view of the walls surrounding the fort in the midst of the Aravalli Ranges. The sand dunes of the Thar desert are also visible from the walls.

Tourists are warned that some of the lesser travelled areas of the wall should not be climbed. Ancient defence mechanisms and traps, although mostly disabled, are still assumed to exist in some of its more remote positions. Those wishing to explore the miles of ruins on their own are warned that accidents can happen.

Must read: Vijay Stambh – Tower of Victory in Rajasthan

Amazing,thanks for the image and history of the GREAT WALL,,Indians are advised to look this heritage.

Amazing.It is the glory of past which is not known to many Indians, thanks for the picture and history of great wall of lnia

Mystery Of India
Reply to  nkumar

Thanks, help us by sharing this article on social media. Spread the knowledge about India. thanks