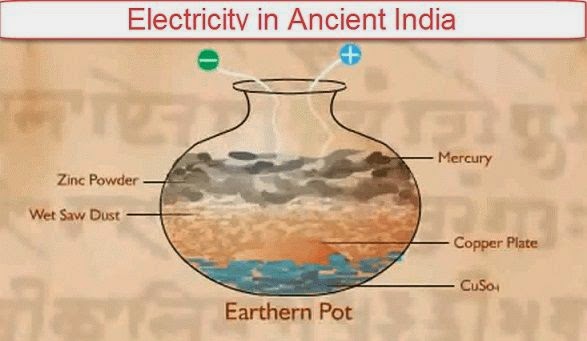 In the Prince’s Library of Ujjain in India, there is a well preserved document called the ‘Agastya Samshita‘, which dates back to the first millennium BC. It contains a detailed description not only of how to construct an electric battery/cell, but also, how to utilize the battery to ‘split’ water into its constituent gasses.

“Place a well-cleaned copper plate in an earthenware vessel. Cover it first by copper sulfate and then moist sawdust. After that put a mercury-amalgamated-zinc sheet on top of an energy known by the twin name of Mitra-Varuna. Water will be split by this current into Pranavayu and Udanavayu. A chain of one hundred jars is said to give a very active and effective force.”

When a cell was prepared according to Agastya Samhita and measured, it gives open circuit voltage as 1.138 volts, and short circuit current as 23 mA.

Translation:
He says that if we use the power of 100 earthen pots on water, then water will change its form into life-giving oxygen and floating hydrogen.

Translation:
If hydrogen is contained in an air tight cloth, it can be used in aerodynamics, i.e. it will fly in air.

Translation:
A layer of polish of artificial gold or silver is called satkriti (good deed.)

Translation:
In an iron vessel and in a strong acidic medium, gold or silver nitrate covers copper with a layer of gold or silver. The copper that is covered by gold is called shatakumbha or artificial gold.

These things came to light when Rao Saheb Krishnaji Vajhe had passed the engineering exam in 1891 from Pune. While looking for scriptures related to science, he found a few pages of the Agastya Samhita with Damodar Tryambak Joshi of Ujjain. These belonged to around Shaka Samvat 1550. Later on, after reading the said description in the pages of the Samhita, Dr.M.C.Sahastrabuddhe, the Head of the Sanskrit Department in Nagpur felt that the description was very similar to that of Daniel Cell. So he gave it to P.P. Hole, the Professor of Engineering at Nagpur, with a request to investigate.

When Mr. Hole and his friend started preparing the apparatus on the basis of the above description, they could understand all the things except shikhigreeva. On checking the Sanskrit dictionary, they understood that it meant the neck of a peacock. So, he and his friend went to Maharaj Bagh and asked the chief when a peacock would die in his zoo. This angered the gentleman. Then they told him that they needed its neck for an experiment. The gentleman asked them to give in an application. Later, when during a conversation, they narrated this to an Ayurveda expert, he burst out laughing and said that here it did not mean the neck of a peacock, but a substance of that colour, that is copper sulphate. This solved the problem. Thus, a cell was formed and measured with a digital multimeter. It had an open circuit voltage of 1.38 volts and short circuit current of 23 milli amperes.
The information that the experiment was successful was conveyed to Dr.M.C. Sahastryabuddhe. This cell was exhibited on August 7, 1990 before the scholars of the fourth general meeting at the Swadeshi Vigyan Sanshodhan Sanstha, Nagpur. It was then realised that the description was of the electric cell. They investigated as to what the context was and it was realised that Sage Agastya had said many things before this.

Rao Saheb Vajhe, who spent his life in rummaging the Indian scientific scriptures, and discovering various experiments, gave different names to electricity on the basis of the Agastya Samhita and other scriptures and that electricity is created in different ways. Ancient Vedic technologists produced six kinds of electricity:

But what about further progress in this field ?