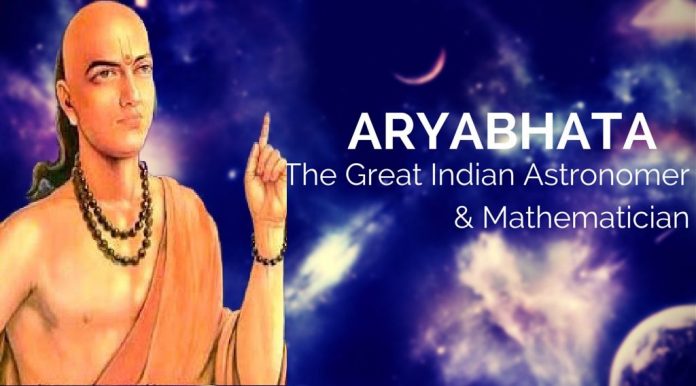 On October 22, 2008, a group of space scientists huddled together in tense anticipation. They were awaiting the launch of Chandrayaan-1, India’s first lunar probe. The probe, which made India just the fourth nation to plant its flag on the moon, led to important findings such as evidence of water and ice on the moon’s surface. As opposed to trying to reach the moon on a direct trajectory, the mission involved sending the probe to the moon via an unorthodox method, a series of orbit-increasing manoeuvres. To do so, the probe used an equation by Aryabhata – as explained by the then head of the Indian Space Research Organization, G. Madhavan Nair, in an India Today news article on February 22, 2015.

Who was this Aryabhata?

Aryabhata was a fifth-century astronomer and mathematician who, in 499 CE, wrote what was to become a singularly famous astronomical treatise, revolutionizing the way people thought of the universe. Its name was the Aryabhatiya. He mentions in the Aryabhatiya that it was composed 3,600 years into the Kali Yuga, when he was 23 years old. This corresponds to 499 CE, and implies that he was born in 476.

Aryabhata provides no information about his place of birth. The only information comes from Bhāskara I (7th-century Indian mathematician), who describes Aryabhata as āśmakīya, “one belonging to the aśmaka country.” During the Buddha’s time, a branch of the Aśmaka people settled in the region between the Narmada and Godavari rivers in central India; Aryabhata is believed to have been born there. But there have been numerous other places proposed by historians as his birthplace. Some conjecture that he was born in south India, perhaps Kerala, Tamil Nadu or Andhra Pradesh, while others conjecture that he was born in the north-east of India, perhaps in Bengal.

We do know that Aryabhata wrote Aryabhatiya in Kusumapura and it is also accepted that he lived most of his life in Kusumapura. However, location of Kusumpura is not certain. According to many scholars it was located close to Pataliputra (which was refounded as Patna in Bihar in 1541).

We should note that Kusumapura became one of the two major mathematical centres of India, the other being Ujjain. Pataliputra, being the capital of the Gupta Empire at the time of Aryabhata, was the centre of a communications network which allowed learning from other parts of the world to reach it easily, and also allowed the mathematical and astronomical advances made by Aryabhata and his school to reach across India and also eventually into the Islamic world.

Aryabhata’s masterpiece The Aryabhatiya is a small astronomical treatise written in 118 verses giving a summary of Hindu mathematics up to that time. The Aryabhatiya contains an introduction of 10 verses, followed by a section on mathematics with 33 verses, then a section of 25 verses on the reckoning of time and planetary models, with the final section of 50 verses being on the sphere and eclipses.

The mathematical part of the Aryabhatiya covers arithmetic, algebra, plane trigonometry and spherical trigonometry. It also contains continued fractions, quadratic equations, sums of power series and a table of sines. Aryabhata did solve quadratic and indeterminate equations, and provided an extremely accurate approximation for “pi”.

G. Ifrah, (French auhor and Mathematician) argues that Aryabhata was also familiar with numeral symbols and the place-value system. In his book A universal history of numbers : From prehistory to the invention of the computer, G. Ifrah writes:

… it is extremely likely that Aryabhata knew the sign for zero and the numerals of the place value system. This supposition is based on the following two facts: first, the invention of his alphabetical counting system would have been impossible without zero or the place-value system; secondly, he carries out calculations on square and cubic roots which are impossible if the numbers in question are not written according to the place-value system and zero.

Aryabhata gave an accurate approximation for π. He wrote in the Aryabhatiya the following:-

Aryabhata’s value of π is a very close approximation to the modern value and the most accurate among those of the ancients. There are reasons to believe that Aryabhata devised a particular method for finding this value. It is shown with sufficient grounds that Aryabhata himself used it, and several later Indian mathematicians and even the Arabs adopted it. The conjecture that Aryabhata’s value of π is of Greek origin is critically examined and is found to be without foundation. Aryabhata discovered this value independently and also realised that π is an irrational number. He had the Indian background, no doubt, but excelled all his predecessors in evaluating π. Thus the credit of discovering this exact value of π may be ascribed to the celebrated mathematician, Aryabhata.

Much of the mathematics that he developed and wrote about, however, was for use in astronomy. This included his work in trigonometry. Aryabhata was the first to develop the concept of sines and cosines. The most substantial of Aryabhata’s four chapters is called “Gola” – the sphere. Aryabhata was the first Indian astronomer we know of who explicitly said that the earth was round. However, a reading of the Aryabhatiya reveals that he went much further.

Aryabhata proposed what was then a revolutionary concept: the earth, he said, was not stationary, but rotated on its own axis, from west to east. He further explained (correctly, as we know today) that the earth’s rotation took place over a single day and that the sun might be rising in one part of the world at the same time as another part of the globe was swathed in darkness – depending on which part of the earth was facing the sun. To explain to baffled readers how the earth could be spinning, Aryabhata used an analogy. Just as someone in a moving boat thinks that he is stationary and that the river bank is moving in the direction opposite to the boat, he said, we think that the earth is stationary and that the heavens are moving from east to west, while in reality the earth is spinning from west to east.

Aryabhata gives the radius of the planetary orbits in terms of the radius of the Earth/Sun orbit as essentially their periods of rotation around the Sun. He believes that the Moon and planets shine by reflected sunlight, incredibly he believes that the orbits of the planets are ellipses. He correctly explains the causes of eclipses of the Sun and the Moon.

Aryabhata’s revolutionary theories did not stop at rotation. Using only theories and calculations on planetary motion, he worked out that the orbits of planets were elliptical rather than perfect circles.

Aryabhata gives a systematic treatment of the position of the planets in space. He gave the circumference of the earth as 4967 yojanas and its diameter as 15811/24 yojanas. Since 1 yojana = 5 miles this gives the circumference as 24835 miles, which is an excellent approximation to the currently accepted value of 24902 miles.

Bhaskara I who wrote a commentary on the Aryabhatiya about 100 years later wrote of Aryabhata:-

Aryabhata is the master who, after reaching the furthest shores and plumbing the inmost depths of the sea of ultimate knowledge of mathematics, kinematics and spherics, handed over the three sciences to the learned world.

Prabalgad Fort – The Most Dangerous Fortress