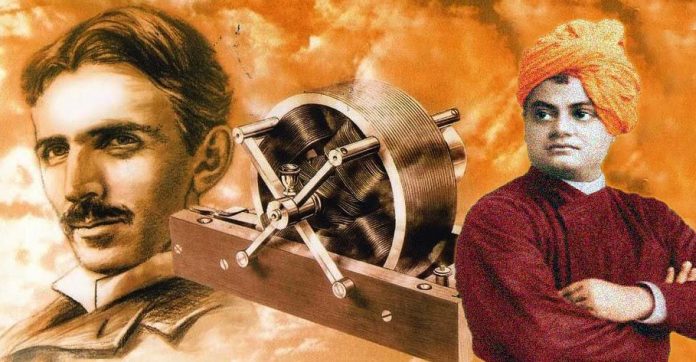 Nikola Tesla (1856-1943) was the genius who lit the world, whose discoveries in the field of alternating polyphase current electricity advanced the United States and the rest of the world into the modern industrial era. As early as 1891 Tesla described the universe as a kinetic system filled with energy which could be harnessed at any location and invented many useful devices like a system of arc lighting (1886), the alternating current motor, power generation and transmission systems (1888), systems of electrical conversion and distribution by oscillatory discharges (1889), and a generator of high frequency currents (1890), to name a few. His concepts during the following years were greatly influenced by Veda.

The Vedas are considered the earliest literary record of Vedic Civilization, and the most sacred books of India consisting of hymns, prayers, myths, historical accounting, dissertations on science, and the nature of reality, which date back at least 5,000 years. The nature of matter, antimatter, and the make up of atomic structure are described in the Vedas. The language of the Vedas is known as Sanskrit.

“All perceptible matter comes from a primary substance, or tenuity beyond conception, filling all space, the akasha or luminiferous ether, which is acted upon by the life giving Prana or creative force, calling into existence, in never-ending cycles all things and phenomena.”- Nikola Tesla, Man’s Greatest Achievement, 1907

As you can see, Tesla was aware of ancient concepts and the correlation it had with the science he was working on – using sanskrit worlds like “akasha,” and “prana” to describe the force and matter that exists all around us. These words come from the Upanishads (a collection of Vedic texts).

But where did Tesla learn Vedic concepts and Sanskrit terminology?

Where can we go to find God if we cannot see Him in our own hearts and in every living being.

Swami Vivekananda (1863—1902) was an Indian Hindu monk and a key figure in the introduction of Indian philosophies of Vedanta and Yoga to the western world. He was one of the most influential philosophers and social reformers in his contemporary India and the most successful and influential missionaries of Vedanta to the Western world. In 1893 Swami Vivekananda began a tour of the west by attending the Parliament of Religions held in Chicago. During the three years that he toured the United States and Europe, Vivekananda met with many of the well known scientists of the time including Lord Kelvin and Nikola Tesla.

Nikola Tesla was much impressed to hear from the Swami Vivekananda his explanation of the Samkhya cosmogony and the theory of cycles given by the Hindus. He was particularly struck by the resemblance between the Samkhya theory of matter and energy and that of modern physics.

Nikola Tesla was introduced to the Vedas by Swami Vivekananda Ji after he asked Swami to enlighten him on spiritual connections and why western scientists were praising, while talking all about the Vedic texts. Swami Vivekananda’s effect on Tesla was so Great that he became vegetarian and began using the Sanskrit words.

In 1895, Swami Vivekananda shared with Tesla the idea of matter and energy to be one, and requested him to prove it through mathematics. However, Tesla failed to accomplish it. Vivekananda also interacted with the other two giants of Western science, namely William Thomson (Lord Kelvin) and von Helmholtz in New York. Eventually after 10 years, in 1905, Albert Einstein proved the oneness of matter and energy (E = mc2).

Nikola Tesla taking original knowledge from Vedas, invented many things that we all use on a daily basis but most people have never even heard of him because his name was removed from common history (just like much of the teaching of the Vedas) and he was eventually murdered. He knew too much and wanted to share it freely for the betterment of mankind, not to exploit it. Unfortunately not everyone saw eye to eye with him.

Here is just a partial list of some of Tesla’s contributions to the world based on his research and experiments from Vedas, that he had not been given credit for:

Likewise in ancient India, some selective greatest teachings were passed to the deserving Sages verbally, which remain stored in their memories, so that the power of knowledge is not misused by demonic beings referring to texts, if it were written. Only the knowledge which was helpful for mankind were passed to common human beings.

True to this belief of Vedas, all Tesla’s engineering was done in his head, he never worked things out on paper or used scale models to come to a functioning final result. Things would appear in his head and he would simply record it exactly as it came to him, similar to Beethoven.

Tesla died with the BrahmaAstra (Scalar Interferometer) knowledge in his head, as he did NOT want to give this destructive Vedic technology to the US military and Vatican, as promised to Vivekananda. It was to help mankind, NOT to destroy or enslave.

Its wonderful idea to let radiance of ancient India & culture shine brighter before eyes keen to comprehend the vastness of cultural heritage.
Let this become a tool for hunting the men & minds unpolluted withe malicious hatered jealousy & anger.
Instead let there be a cool breeze of mutual unconditional love,understanding & cooperation.
Let there a morning where there is no stench of dead corpses & cries of orphaned children.
Let’s all pray for peace & harmony.
Atma Namstey to all Atmas.

Its wonderful idea to let radiance of ancient India & culture shine brighter before the eyes keen to comprehend the vastness of cultural heritage.
Let this become a tool for men & minds unpolluted with malicious hatered jealousy & anger.
Instead let there be a cool breeze of mutual unconditional love,understanding & cooperation.
Let there be a morning where there is no stench of dead corpses & cries of orphaned children.
Let there be air full of confidence & happiness
Let’s all pray for peace & harmony.
Atma Namstey to all Atmas.

My dear people from India, just two sentences: Archives and historical papers gives us strong indication that narrative about Tesla as Serb was fabrication from intelligence sources with long run. Tesla was born in part of Croatia with very turbulent past and a lot of different influences, but this part of Croatia was never Serbia and in time of Tesla there was not Serbian entity at all. This is historical truth – other side of this truth is political manipulation and social engineering as well as heavy hybrid political campaign worldwide with claim that Tesla is Serb. Another truth will… Read more »