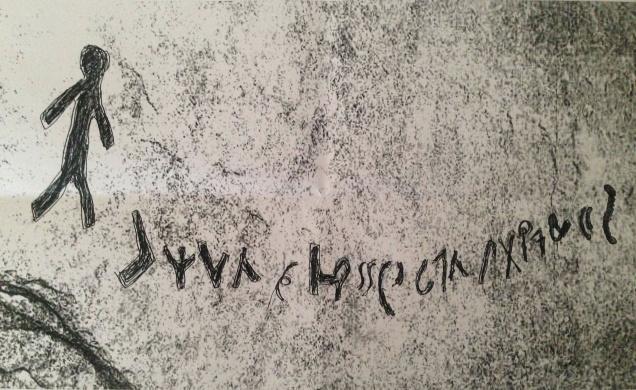 The Indus Valley Civilisation has puzzled archaeologists and researchers ever since it was first discovered in the early twentieth century. Who were these ancient people who lived along the Indus River between 3,300 and 1,300 B.C.? Could they have been wiped out by a flood or there may have been an epidemic or some terrible disease which killed the people? Or did they abandon the northwest part of the subcontinent because the river (Saraswati river) they depended upon dried up, or changed course, to migrate to other parts like South India?

“On the goddess Kotamma temple woollen market way there is a rocky roof shelter for shepherds and sheep to stay at night up to morning.”

The sentence emerged after a set of 19 drawing and pictographs discovered on a hilltop in Hampi (Karnataka, India) were deciphered using root morphemes of Gondi Tribe language.

The Gondi people are a Dravidian people of central India, spread over the states of Madhya Pradesh, eastern Maharashtra (Vidarbha), Chhattisgarh, Uttar Pradesh, Telangana and Western Odisha. With over four million people, they are the largest tribe in Central India.

“Eleven of the Hampi pictographs resemble the Late Harappan writing of the Indus Valley Civilisation”, says Dr KM Metry, professor of tribal studies at the Kannada University. The professor claims that this shows that after the collapse of the civilisation situated in North-West India, the Harappans moved to other parts of the country, with some of them settling in Central India and a majority of them in the South.

Years of his research on Gondi culture, visits to tribal areas in Chhattisgarh and recent discovery of drawing led him to believe that undeciphered script of the Indus Valley Civilisation is a combination of Gondi symbols.

“The ability to decipher the script has proven elusive because no one has attempted to study the script using Gondi symbols and language. When you start looking at the script keeping in mind Gondi symbols, then everything becomes clear,” says Dr. Motiravan Kangali, a linguist and expert in Gondi language and culture from Nagpur.

Though the discovery is yet to be authenticated, Dr. Metry and his associates are very optimistic about their work. If the discovery stands the scrutiny of experts in the field, it would mean that the Gonds living in central and southern India could have migrated from the Indus Valley civilisation.