However, the university started suffering from lack of patronage by Indian kings between the 11th and 12th centuries. End came in 1193 when Ikhtiyar-uddin Mohammed Bin Bakhtyar Khilji, a general of Slave dynasty ruler Qutubddin Aibek, set it on fire.

Nalanda was the first ever residential university in the world, holding capacity for thousands of students to stay on campus in dorms. During its heyday, Nalanda could boast of its capacity to accommodate 10,000 students and 2,000 professors. The university was considered an architectural masterpiece, and was marked by a lofty wall and one gate. Nalanda had eight separate compounds and ten temples, along with many other meditation halls and classrooms. On the grounds were lakes and parks. The library was located in a nine storied building where meticulous copies of texts were produced. The subjects taught at Nalanda University covered every field of learning, and it attracted pupils and scholars from Korea, Japan, China, Tibet, Indonesia, Persia and Turkey. 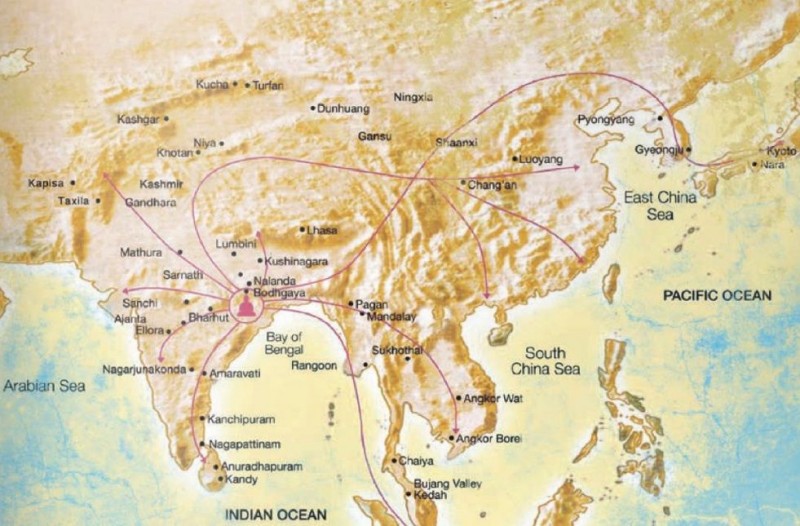 Nalanda was an extraordinary centre of learning for seven centuries. The name probably comes from a combination of ‘nalam’ (lotus, the sysmbol of knowledge) and ‘da’, meaning to give, so Nalanda means “Giver of Knowledge”.

The 7th Century Chinese pilgrim, Xuanzang, visited Nalanda and wrote detailed accounts of what he saw, describing how towers, pavilions and temples appeared to”soar above the mists in the sky so that monks in their rooms might witness the birth of the winds and clouds”

Nalanda University was destroyed three times by invaders, but only rebuilt twice. The first destruction was by the Huns under Mihirakula during the reign of Skandagupta (455–467 AD). But Skanda’s successors promptly undertook the restoration, improving it with even grander buildings.

The second destruction came with an assault by the Gaudas in the early 7th century. This time, the Bauddha king Harshavardhana (606–648 AD) restored the Buddhist university.

The real blow to Nalanda came with the arrival of Muslim invaders in 1197 led by Mohammad Bakhtiyar Khilji, who were intolerant of other religions and cultures. Much of the university was demolished and many of its scholars, including Buddhist monks, were burned alive. The great library of Nalanda was so vast that it is reported to have burned for three months after the invaders set fire to it and nearly 9 million manuscripts were wiped out.

While most of the ancient campus of Nalanda was left in ruins extending over an area of about 150,000 square metres, the spirit and values upon which it was created remained.

Eight hundred years after the destruction of Nalanda, former President of India Dr. A.P.J. Abdul Kalam, while addressing the Bihar State Legislative Assembly, in March 2006 mooted the idea of  reviving the university.  In his speech he envisaged it as a university that would revive the glory of the ancient  seat of learning.

The State Government of Bihar quickly adopted the visionary idea and consulted the Government of India on the way ahead. It also began its search for a suitable location for the new Nalanda University. It identified and acquired 450 acres of land for the University in Rajgir, Bihar, just 12 km away from the original site.

The University began its first academic session on September 1, 2014. with 15 students including five women. Initially set up in temporary facilities in Rajgir, a modern campus is expected to be finished by 2020.

Source: Times of India and Wikipedia

[…] More than 2700 years back a huge university existed in the ancient India where over 10,500 students from all across the world came for higher studies.This was the Takshashila university of ancient India (wrongly spelled as Taxila today). It was an important Vedic/Hindu and Buddhist center of learning but wasn’t as well organized as the University of Nalanda. […]

Somapura Mahavihara – Ruins of the Buddhist Vihara at Paharpur