Medical science is presented in the books of Ayurveda as a separate Shastra. However the original medical science present in the Vedas, the Mahabharata and the Puranas is far more superior to the Ayurveda. All the Shastras (sacred scripture) of India have their origin in the Vedas. The Vedas are composed in the Vedic era extending from 23960 years B.C to 5560 BC. The Mahabharata is composed during 5560 BC and the Puranas still later.

Animal and Human cloning is well explained the Veda. Rubhus Brothers produced a Horse from another horse and a cow from the skin of a cow. They also brought youthfulness to their old parents. Their father was old but they were cloned young to bring back the youth of aging parents.
Other achievements like Parthenogesis, Test-tube-baby etc are also reported in ancient literature of India. 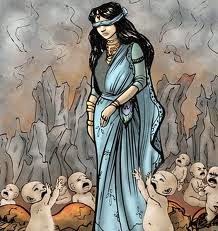 Early in The Mahabharata, there is a story about how the hundred Kaurava brothers came into being.  Gandhari became pregnant naturally from her husband Dhrutarashtra. However she did not deliver a child even after two years passed. Therefore, burning with anger, Gandhari aborted her foetus. In fact it was not a foetus, not a developed child; but a mole, a mass of living cells having no shape like a human child. As soon as the sage Vyasa heard about her abortion, he came immediately, took the aborted cell mass in possession and divided that mole. Sage Vyasa dissected the mole carefully and found out normal living cells, which he kept separately in Ghruta Kumbha. Ghruta Kumbha does not mean an ordinary pot of clay, filled with Ghee. ‘Ghruta’ means a nutrient medium supplying life energy, which was kept in a special Kumbha, a highly sophisticated urn. There were 101 cells and those cells were grown separately in Ghruta Kumbhas or nutrient urns. In due course children were born, 100 Kaurawas and their sister Dusshala. (Mahabharata, Adi, 115)

Many experiments on Test-Tube babies can be found in Mahatbharata’s Adi Parva. Draupadi and Dhrushtadyumna got birth from an utensil only from the semen of king Drupada. They had no mother. Drona was born from the semen of Bharadvaja, without any help of any mother. Further observations were also done in the Mahabharata period that one test tube baby Drona was married to another test tube baby Krupi and they lead normal married life producing one son Ashvatthama. Another test-tube baby Krupa was married to normal girl. This couple too behaved normally. Such an experiment has not yet been done in the modern science.

Concept of test tube baby is also found in the birth of Lord Balarama. An embryo of Devaki was taken out and implanted in the uterus of Rohini. Rohini delivered a child, which was termed as Samkarshana, who later became famous as Balarama, elder brother of Krishna. (Bhagawata 10-2-13). This means that the ancient sages had the technology to implant the embryo of one woman into the womb of another woman.

Kunti used a technique of Parthenogenesis. She stimulated her ovum with the help of solar energy and produced Karna.(Mahabharata Adi 111.) Such experiments are done in the modern science to produce young ones only in the lower animals and not yet in the human beings. The technique is termed as Parthenogenesis by the present day European scientists. The term Parthenogenesis contains a word ‘Partha’ which means ‘of Prutha’. Prutha is Kunti’s second name. Was this a chance happening or did they coin the term from Kunti’s experience?

Thus it seems that medical science was very well developed in ancient India and all that knowledge is stored in our Shastras. Ancient method of test tube baby was more efficient as they knew the way of creating babies outside the mother womb. Ayurveda is an ancient medicinal science that not only has information on many highly advanced genetics theories but also many others that is either discovered or yet to be discovered.

Human and Animal cloning in Ancient India - Mystery of India

[…] produced a horse from another horse and a cow from the skin of a cow. Other achievements like Parthenogesis, Test-tube-baby etc are also reported in ancient literature of India.    When Dr. P.V. Vartak found mentioned in […]

need to find those holy books…..

need to find those holy books…..pls share if available

Mystery Of India
Reply to  krishna

these reference are in our Holy Books like Rigveda

Ancient Indians were great….the modern science is only a spec of dust in front of their vast knowledge…it is not necessary that we can always explain what they did in terms of today’s scientific terminology coz many dimensions of science exist unknown to modern world. If we read that Draupadi n Dhrushtudhyumna were born from Yagna fire it should be taken as it is…not needed to imagine it in a process we know only through today’s science…Simularly Balram was transferred by sankarahan process into another garbha..not necessary to follow the crude surgical process of actually transferring an embryo…bodies can be… Read more »

before aryans entered india dravidans ruled the whole india extending upto kumari kandam(lemuria which is sunk in sea 20000 years ago or later) aryans translated the knowledge of dravidans into their language sanskrit when aryans found them self strong enough to fight dravidans both battled each other aryans were strong in north india so dravidans moved to south of india so kumari kandam(lemuria) became capital of dravidans srilanka,indonesia,singapore etc is the left out of kumari kandam after the sank continent. if lord ram defeated ravan (son of bali after him mahabalipuram near chennai and bali island in indonesia still exist)… Read more »