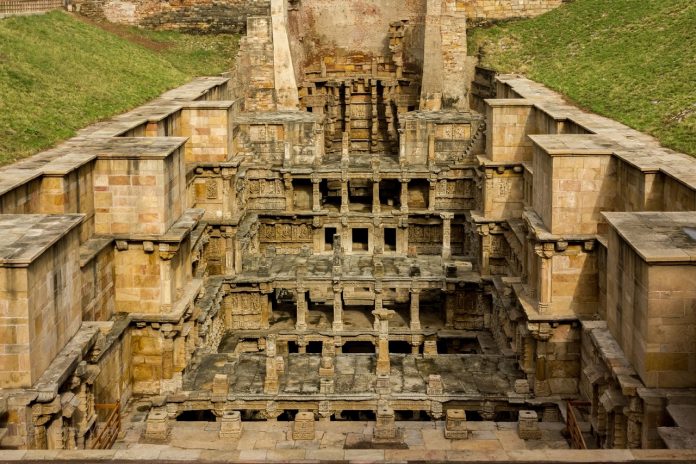 Rani Ki Vav is the oldest and the grandest stepwell in the state of Gujarat, India. It is situated at Patan and is believed to have been built during 1022 to 1063 AD. Rani (Queen) Udayamati commissioned this vav or stepwell, in the memory of her husband King Bhimdev I of the Solanki dynasty. In Hindi, “Rani” means “Queen,” and “Vav” means “Well.”

It is believed that the Rani-Ki-Vav was built beside the Saraswati river. When the river changed its course, however, it flooded the stepwell. As a result, the monument was buried under silt for centuries. Another story suggests that the stepwell was intentionally buried with mud by the Solanki rulers to protect it from muslim invaders. The site was re-discovered in the late 1980s, when it was excavated by the Archeological Survey of India, with the carvings found in pristine condition.

Stepwells are a distinctive form of subterranean water resource and storage systems on the Indian subcontinent, and have been constructed since the 3rd millennium BC. They evolved over time from what was basically a pit in sandy soil towards elaborate multi-storey works of art and architecture.

The vavs of Gujarat are not merely sites for collecting water and socialising, but also simultaneously hold great spiritual significance. They were originally constructed quite simply, but became more intricate over the years, perhaps to make explicit this ancient concept of the sanctity of water by carving it out in stone deities. One of its pillars is so beautifully carved, that it reminds one of the ancient charm of the monument. It appears the well is made up of bricks. There is small gateway just below the last step of the Rani Ki Vav well. The gateway opens into a 30 km tunnel which leads to the nearby town of Siddhpur. This was used by the King to escape in the times of defeat. The tunnel has now been blocked by stones and mud to avoid any mishap.

The ornate and beautifully decorated stepwell was built in the Maru-Gurjara architectural style, and measures 64 m in length, 20 m in width and 28 m in depth. The stepwell is divided into seven levels of stairs, the deepest of which is the fourth level. This level leads into a rectangular tank.
The major sculptures number at over 500, while the minor ones number at over a thousand. The central theme is the Dasavataras, or ten incarnations of Vishnu, including Buddha.  The avatars are accompanied by sadhus, brahmins, and apsaras (celestial dancers), painting their lips and adorning themselves. At water level you come to a carving of Sheshashayi-Vishnu, in which Vishnu reclines on the thousand-hooded serpent Shesha, where it is said he rests in the infinity between ages.

It is said that around 60 years back there were Ayurvedic plants near the well which possessed medicinal properties. Due to this, the water of the well also gained curative powers capable of healing viral disease, fever, etc.

Also, there were Chambers built in the Rani Ki Vav. Here, the royal families rested in the summer months. The water from the well acted as the natural air conditioner by decreasing the heat and making the breeze cool. The archaeologists are thinking of excavating the nearby area. It is believed that there must be palaces and royal residences in the vicinity, which used the well as the medium for air cooling.

Mystery Of India
Reply to  Prashant

Your website and all your articles are absolutely wonderful. Thank you for sharing these treasures.